In October, 1986, the first bright annealing line for cold rolled wide-band stainless steel in China was put into operation in the No. 7 rolling plant of TISCO.

In August, 1994, the 1594mm hot continuous rolling project and the 1000 ton fast forging mill of TISCO were completed and put into operation.

At the end of 1995, Shanghai No. 10 iron and steel works and Allegheny of the United States Ludem company established Shanghai Shida, the first joint venture stainless steel precision belt manufacturer in China. The first phase of the project was laid the foundation in 1997 and put into operation in 1999.

At the beginning of 1997, the State Planning Commission, the economic and Trade Commission and the Ministry of metallurgy jointly set up a stainless steel research group to conduct market research, and formulated China’s “Ninth Five Year Plan” for stainless steel development and the long-term plan for 2010, encouraging state-owned enterprises to develop stainless steel, and establishing the development layout of “Nanbao, Beitai”.

In 1997, the new 20 high Sendzimir cold rolling mill introduced by TISCO from France was put into operation.

In 1997, Zhangjiagang POSCO Stainless Steel Co., Ltd. (ZPSs), which is controlled by POSCO steel, was established, and the first phase of cold rolling project started in April.

In January, 2001, the foundation of Baosteel’s stainless steel project was laid, and the first pile was laid in June.

In december2002, the foundation of Lianzhong (Guangzhou) Stainless Steel Co., Ltd., which was solely established by Taiwan Yilian in december2001, was laid. The cold rolling plant, hot rolling plant and steel-making plant were put into operation in 2004, 2006 and 2007.

In 2002, China’s apparent consumption of stainless steel surpassed that of the United States and ranked first in the world.

In September2004, the new 1.5 million ton stainless steel project of TISCO was started and completed in september2006, with a production capacity of 3million tons.

In 2006, the phase I 200000 ton slab production line of Southwest stainless steel company was put into operation.

In july2006, the hot rolling and steelmaking project with an annual output of 600000 tons of ZPSs was put into operation, becoming a comprehensive stainless steel manufacturer.

In 2006, China’s stainless steel output surpassed that of Japan and ranked first in the world.

In may2009, Beihai Chengde was established.

In August, 2009, the steelmaking production line of Dongfang special steel was officially put into operation.

In november2013, CICC metal was established.

In March, 2019, the core components of China’s first fourth generation sodium cooled fast reactor were made of high-purity stainless steel “made by TISCO”.

In september2019, the world’s first stainless steel futures was listed and traded in the last stock exchange.

In August, 2020, TISCO group and China Baowu jointly restructured. On December 23, TISCO group completed the industrial and commercial change registration of 51% equity, and the controlling shareholder was changed to China Baowu.

In December, 2020, the “signing ceremony of the agreement between Taigang group trusteeship Baosteel Desheng and Ningbo Baoxin” was held in Baowu building. 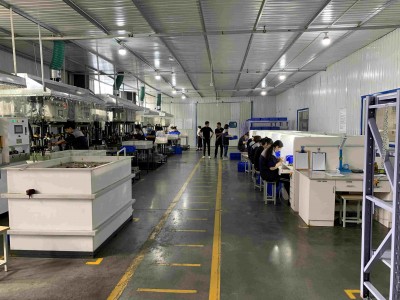 At present, the company has more than 100 employees and more than 20 technical and R & D personnel. The company’s main products are stainless steel casting pipe fittings, quick connectors, ball valves, check valves, precision accessories, marine hardware, cast auto parts, etc. The product material is mainly 304 304L 316 316L CF8M WCB 1.4408, etc. The company formally passed ISO9000 certification in 2020 and is actively preparing for TS16949 quality system certification. With its good product quality and reputation, the company has become more and more prominent in the international market, with partners all over the world.

In 2019, the export volume accounted for more than 60% of the total sales, and has established long-term and stable cooperative relations with a number of enterprises in Europe, the United States and Japan. The company always adheres to the business philosophy of starting from the heart, being innovative and loyal to ingenuity, and looks forward to cooperating with you based on the principles of seeking development from research and development, meeting opportunities in development, building trust in opportunities and consolidating contacts in trust. For details, please contact 18902146189